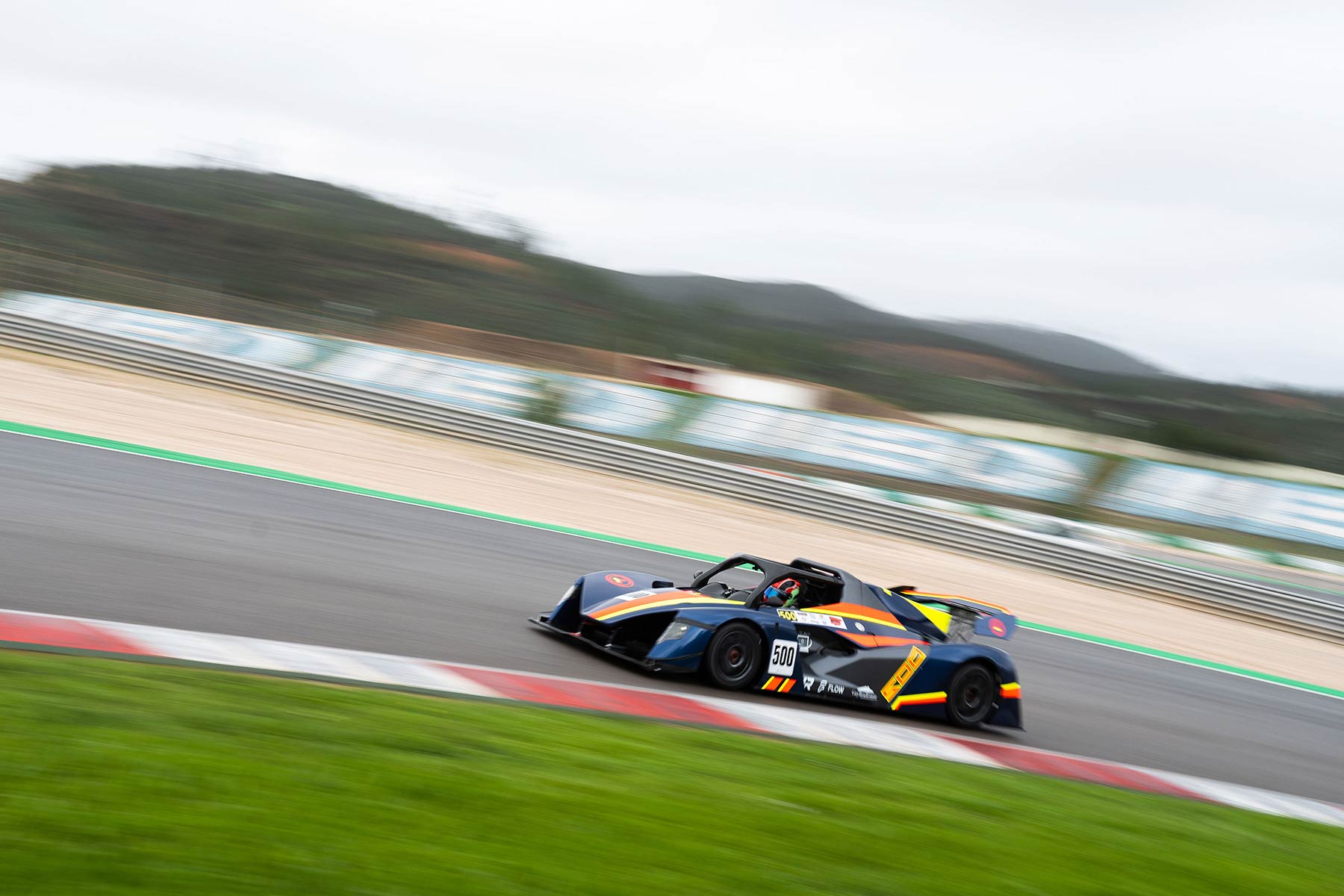 Richard Morris’ 2022 European Sports Prototype Cup season as a works driver for Revolution Race Cars culminated with two battling drives to the podium from the back of the grid at the stunning Autódromo Internacional do Algarve, Portimao, Portugal.

This mid-December season finale saw 20 drivers compete across two 40-minute prototype races. While the south of Portugal provided warmth, conditions were predictably mixed. The track was never dry throughout qualifying or racing and the cars ran on wet tyres all day.

Disaster struck just a few minutes before qualifying got underway, with a last minute issue threatening to prevent Richard from making it into the session. The Revolution team sprang into action, though, and Richard was able to complete the mandatory 3 laps in official practice to take his place on the race grids – although the best he could do was limp round meaning that he would start both races from well down the order in 17th place.

The two races each followed a similar pattern. Both began in damp/mild wet conditions and, in both cases, heavy rain started just before the mandatory mid-race pitstops. As the field roared towards the first corner on each occasion Richard was able to keep his nose clean, finding space among the scrambling and slithering pack, and in both races he gained half a dozen positions on the opening lap.

As the races progressed, Richard continued to pick off rivals in cars such as the brand new flagship Radical SR10 and enjoyed some fantastic wheel-to-wheel racing. A particular highlight was an extended battle with the 800bhp Radical RXC Spyder of Michael Clark which spanned multiple laps of side-by-side action before Richard emerged victorious with a bold move around the outside of one of Portimao’s blind crests. The more rain fell and the wetter conditions became, the better Richard went: demonstrating both his feel in wet conditions and the fantastic traction of the Revolution 500SC.

In each race Richard fought his way up to finish in 2nd place. Meanwhile, both overall victories were taken by the sister Revolution 500SC of James Abbott, partnered for this weekend by local driver Roger Green, underlining the capabilities of this car which was launched 12 months earlier at the same venue. As well as the usual trophies, Richard was presented with a limited edition watch as a prize by BRM Chronographes.

The results mean that for a third full calendar year in a row, across three different championships, Richard achieved at least one podium finish at every race event he contested.

Reflecting on the race weekend and season, Richard said: “This was an incredible way to end a remarkable 2022. While the set-back in qualifying was obviously a great shame and prevented me from being able to challenge for victories at this event, I had two immensely enjoyable races. It really makes you feel alive as a driver to have to fight back through the pack like that. I’ve started to bond now with this Revolution 500SC and understand how to extract the peak performance from it. It’s amazing the traction which it has for such a powerful car, and that means, as well as being a lot of fun in the dry, the wetter it gets the better it gets!
I’m so grateful for this season in which we have achieved an unbelievable amount. Winning at Zandvoort and Donington and achieving podiums in 7 out of 8 races with Revolution, driving in 4 different European countries and the USA, sampling the new all-electric single-seater ERA Championship car at Zolder, and launching a brand new all-electric road car for Genesis by taking it up the world-famous hill at the Goodwood Festival of Speed. I’ve continued to be a proud champion for Racing Pride as well as becoming an ambassador for Athlete Ally, and it’s been amazing to be joined by a huge number of LGBTQ+ guests at events across countries. I’ve loved seeing how I can use my career to bring a community together, and that’s become a huge motivation for me.
I’m working on plans for 2023 already, and I hope it’s going to be another exciting year! If anyone would like to be part of that journey, please don’t hesitate to get in touch and get involved.”

Richard would like to thank his partners GayRealEstate.com, Flow Recovery, GLJtech, Lane Wire Belts, and Vroom Media as well as Revolution Race Cars, the Sports Prototype Cup, and PitBox91 for making this season possible. Richard is an ambassador for Racing Pride and Athlete Ally, as well as a Pride Life Global Inclusion Advocate.