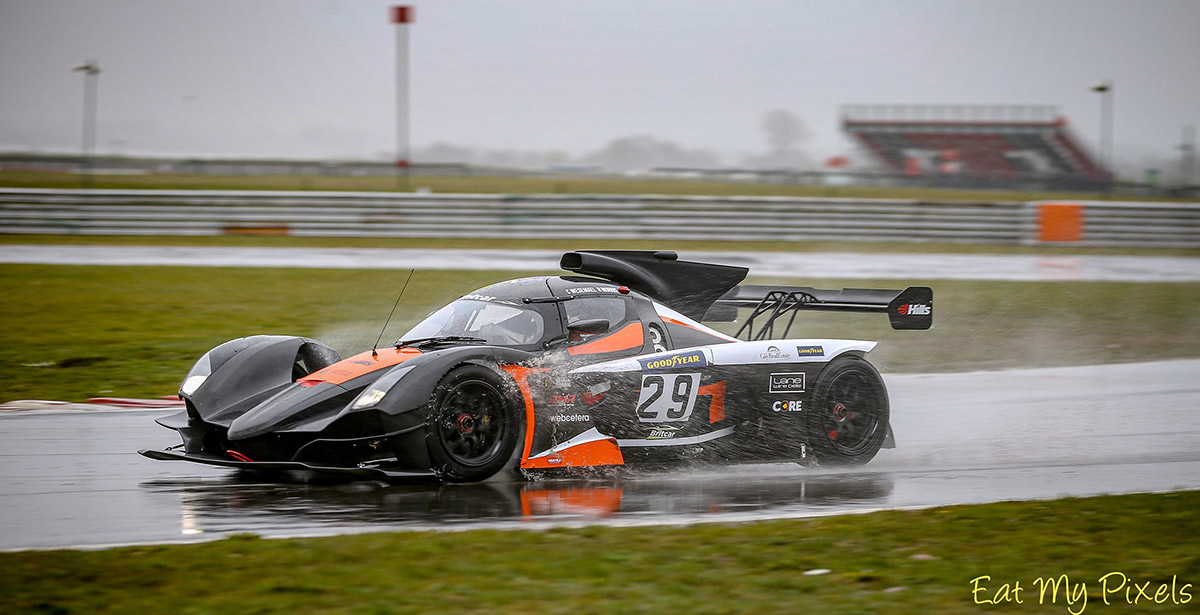 Richard’s 2021 Britcar Endurance Championship campaign with CW Performance Praga continued at Snetterton on 8th May with another double-header event. Weather conditions made for a day of high drama with the racing almost called off due to standing water in the morning. It was also a memorable day as it marked the first meeting at which CW Performance competed as an independent team. This debut could not have been more spectacular, with the team winning both races.

Race 1 started behind the safety car in extreme wet conditions, with Richard taking the first stint. After two laps the safety car pulled in releasing the pack in single file to get racing underway. Richard, like most drivers, took a sensible approach to the early laps, building heat in the tyres and gradually improving the pace lap on lap. Approaching half distance he came into the pits to hand the car to team-mate Christopher ‘Chippy’ Wesemael from a podium position, having held station through a solid opening phase. The race was immediately turned on its head, though, when the safety car came out the following lap. This enabled Angus Fender to pit his Praga under safety car conditions, thereby gaining almost a full lap, as he handed over to his team-mate Jay Morton. Once the safety car came in and the order settled, the race became about whether Chippy could chase down the advantage Morton, competing in his first race with the Praga, had. Chippy’s pace in the wet conditions was scintillating, and soon he was gaining large chunks of time over the inexperienced Morton, while dropping the following Praga of Jack Fabby convincingly. With a few laps to go Morton made a crucial mistake, sliding off the track in the treacherous conditions, which left Chippy to bring home the win for CW Performance!

Conditions improved considerably before Race 2, but it was still a last-minute, marginal call for the team to commit to slick tyres on a track which, although drying, was still damp, greasy, and wet in places. It was, however, the only possible decision given the length of the race ahead and the timing of the pitstop window, and one which all of the team’s rivals mirrored. The race began with a normal rolling start this time with Richard, despite a rather big kick of oversteer on the wet surface as he deployed the power of the Praga’s 365bhp Renault-Alpine turbocharged engine, holding his Praga class grid position of 3rd place behind Richard Wells and Abbie Eaton, and ahead of Charlie Martin. Richard’s consistency and pragmatic approach to the tricky conditions, as well as important overtaking moves on a TCR car and a Ferrari running in amongst the leading Pragas, were rewarded when Eaton and Wells both ran into trouble, leaving Richard in 1st place having pulled out a sizeable gap over the Pragas behind. That gap was cut by the safety car which came out to recover Wells’ car from the side of the track, but this time CW Performance was able to pit under the safety car, along with almost every team on the grid, for Richard to hand the car over to Chippy in the lead of the race. Once the safety car came in, Chippy was unleashed to exploit the pace of the car on a now rapidly drying track and secured a commanding victory to add to the win in Race 1.

Speaking after the event, Richard said: ‘It really is incredible what CW Performance has achieved as a team this weekend. The conditions could not have been more challenging for any team, let alone one running the car independently at a race meeting for the first time. It says a lot about everyone involved that we were able to come together and achieve these two wins. I feel extremely lucky to have such talented and committed people around me – my team-mate Chippy, the mechanics, data engineer, and all those who support us at and away from the track.
This is an amazing platform for us to build on, but we will be looking closely at every aspect of the weekend to identify areas for further improvement, learn as much as possible, and hopefully perform even better next time. It’s a tough championship with a number of top drivers and we need to keep pushing so that we can keep enjoying days like today. Particularly today, though, I would like to thank my sponsors and everyone who has had the faith to come with us on the journey to get us here and give us this opportunity.’