Podium for Richard on Britcar Debut Despite Drama 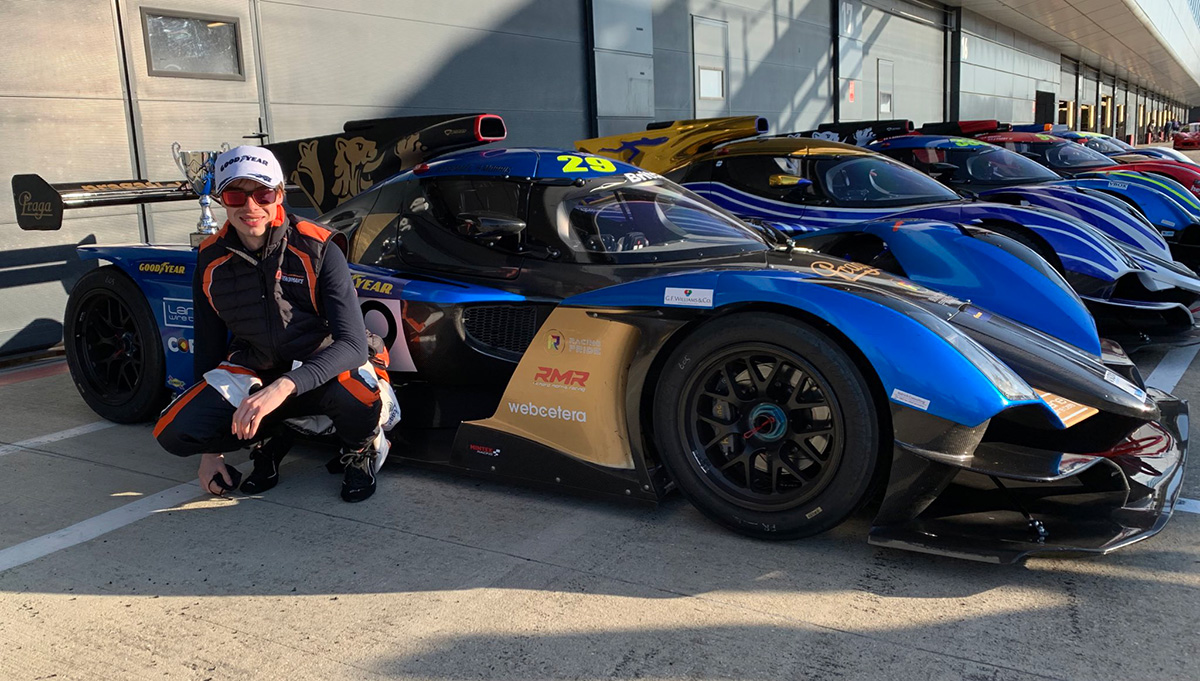 Richard Morris made his debut in the Britcar Endurance Championship at the season-opening event held on 24th April at the Silverstone International circuit, racing the new Praga R1 alongside his 2021 team-mate Chippy Wesemael.

Friday testing was extremely productive. The car ran reliably, Richard and Chippy worked together to dial in the set-up, and both drivers showed very competitive and consistent pace – not easy to achieve on such a busy track, with 37 entries for the event.

Qualifying on Saturday morning was predictably busy, with cars vying for space on the crowded track. Matters were not helped by an electronic gear-shift issue which forced Chippy to park the car early at the end of the session, missing out on crucial low-fuel laps. Still, the pair qualified 5th overall and 4th in class for the first race.

Richard took the start of race 1. Astute car-placement on the opening lap saw Richard first overhaul the sister Praga of Charlie Martin, and then benefit when Richard Wells collided with Abbie Eaton to take the lead of the race! For the first section of the race Richard continued to stretch his advantage over the pursuing Pragas, the closest of which was now Rod Goodman, and began to pick his way through the backmarkers.

An incident at the chicane involving a Ligier and a TCR car then brought out the safety car and Richard’s team took advantage of this to call him in for the mandatory pit-stop and driver change, as the time loss is significantly less than under green flag conditions. The Praga of Charlie Martin also pitted on the same lap, with Chippy setting off pursued by Jack Fabby, who had taken over from Charlie.

As the pit-stop phase of the race played out and the pit-window closed, Chippy emerged in the overall lead of the race and of the Praga class, and he built a commanding margin of over half a minute to the nearest challenger. Unfortunately the gear-shift problem from qualifying then re-appeared and Chippy was forced to complete the final 15 minutes of the race stuck in 6th gear! This cost a large amount of lap-time and, with just a few minutes to go, Jack Fabby was able to come through to take the lead which Richard and Chippy had held for so long.

Chippy heroically managed to bring the car home in 2nd place; a miraculous result considering the mechanical problem with the car. So it was a debut podium for Richard and his team-mate in their first race together!

Richard again took the start for Race 2. Another strong start saw Richard running in 2nd place at the end of the first lap, behind the fast-starting Praga of Richard Wells but having overtaken Charlie Martin’s Praga which had snatched victory with Jack Fabby in Race 1. Drama immediately followed, though, with a huge crash involving a Ferrari, a Ginetta, and several other cars bringing out the safety car on lap 2. While behind the safety car the gear-shift issue appeared once more, despite the work the team had done on the car between races. This meant that when the race restarted Richard was stuck in 2nd gear and unable to shift up! He had no choice but to pull over from the racing line and limp back to the pits.

As the pit-stop window was now open, Chippy got in the car with a new steering wheel installed, in the hope that might cure the electrical issue; but it didn’t. Chippy was stuck in 5th gear this time and, with so much of the race to go and the time loss per lap so extreme, came back in to the pits to retire the car.

It was a shame for the weekend to end in this way, but it could not detract from the strength of the performance Richard and Chippy delivered, or the achievement of securing a podium in their very first race.

Reflecting on the event, Richard said: ‘Clearly, we could have had more from this weekend in terms of the results on paper. It was cruel for our race day to be hampered by reliability problems given how the car had run in testing, and it is the brutal nature of endurance racing that you can lead for so long only to have it undone by a problem at the end of the race. However, there are so many positives to take from this weekend. Both Chippy and myself delivered fantastic pace – we worked well together and found a set-up on the car which wasn’t a compromise but one we were both genuinely happy with. We bonded as a team, and it is still a fantastic achievement to come away with 2nd place on our debut, even if it could have been 1st. I learnt so much over the course of the two days, and I’m certain we will be even stronger heading to Snetterton in less than two weeks’ time.’