Another trophy for Richard at dramatic Snetterton meeting 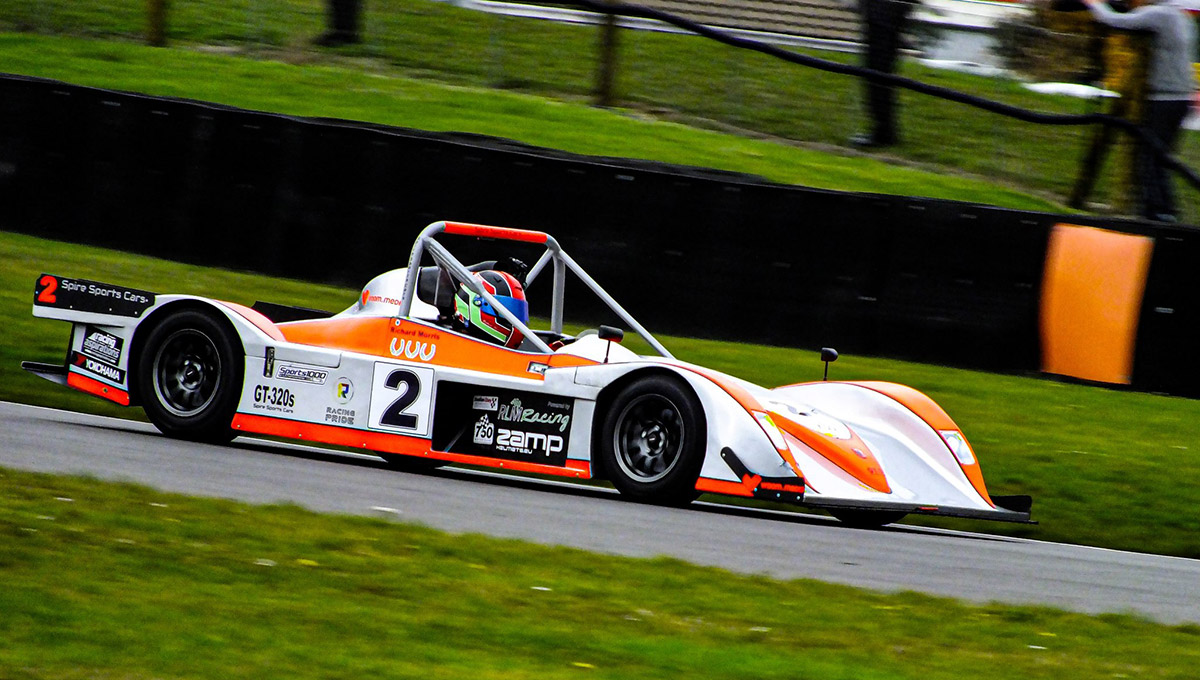 Unpredictable weather conditions and cold temperatures led to a dramatic race meeting at Snetterton on the weekend of 17th-18th October 2020, with Sports 1000 visiting the Norfolk circuit for the second time this year, racing on the full ‘300’ layout on this occasion. It is a venue where Richard has enjoyed plenty of success, bagging his first pole position in sports prototype racing by more than a second at Snetterton on the 300 circuit back in 2019 and taking both a win and the lap record on the 200 circuit in July 2020. With its sweeping corners it rewards smooth driving and the ability to carry speed; skills which are characteristic of Richard’s style.

Rain began to fall as the cars made their way to the assembly area for qualifying on Saturday morning. Richard and his Spire team made the decision to stick with dry tyres but it became apparent through the session that this was the wrong call, as the cars which had opted to fit wets at the last minute had a clear advantage. Richard was also hampered by an engine misfire, an issue which was to recur through the weekend, which cost him power for the first half of the session before seeming to clear out. However, Richard was still able to hustle the car to P4 on the grid for Race 1, only being beaten by cars on wet tyres.

Another heavy rain shower fell ahead of Saturday’s race, leaving the track clearly wet, but already beginning to dry, for the start. This time all of the competitors went on wet tyres and ran varying degrees of wet set-ups. Richard held station on the opening couple of laps while he gained temperature in the tyres and engine, before then putting in a charge to climb up into the lead of the race by three-quarter distance, setting fastest lap along the way. Unfortunately, with the track drying rapidly and the energy Richard had put through the tyres in order to catch and overtake the leading pack, his tyres, especially his rear tyres, began to overheat badly and he was unable to hold it, slipping back to 4th position at the flag although retaining the fastest lap.

Fastest lap in Race 1 qualified Richard on pole position for Sunday’s Race 2. Again the conditions were changeable with heavy showers in the hours leading up to the race but sun beginning to appear as the cars were called to assemble. Richard made a last minute gamble on dry tyres with most of the field still on wets. The first few laps were a disaster – not only was it a struggle for Richard to find any grip on the still-wet track, but the engine misfire reappeared severely cutting Richard’s power off the line and for the opening laps. At the end of lap 1, Richard had dropped right out of the top 10, having been overtaken by over a dozen cars before even reaching turn 1 and nursing a clearly limping engine. However, as the race progressed the engine began to rev more cleanly again and, with heat now in the tyres, Richard went on the attack. He surged up from 12th at the end of lap 1 to 6th at the end of lap 3 and all the way up to 2nd at the flag, having gained around half a minute on the final car he overtook relative to their positions at the end of the opening two laps and at one point in the middle of the race having lapped over a second faster than any other car in the field. His overtakes around the outside of the sister Spire of Ryan Yarrow and the Mittell of Victor Neumann into turn 1 were particular highlights of a drive filled with wheel-to-wheel encounters. Considering the opening couple of laps, salvaging another podium finish seemed like a miracle, and Richard celebrated his 2nd place ecstatically as he crossed the line.

Reflecting on his weekend, Richard said: ‘This was undoubtedly a really tricky race meeting both in terms of the weather and the recurring engine misfire issue which hampered our qualifying pace and race starts. I am, though, extremely proud of the performance that myself and the team were able to put in. Race 1 was a really gutsy attempt which nearly came off and most likely would have done if the track had not continued to dry out. Race 2, meanwhile, really was a lesson in never giving up. I’ll admit it crossed my mind to retire the car at the end of the second lap, while other cars were easily powering past on the straights, but the team boss, Paul Nightingale, waved me on from the pit-wall and it was worth seeing if things would improve. Well…they certainly did improve! The car came alive from the third lap and I think it was one of the most fun races I’ve ever had to carve my way back up onto the podium from there. It’s a massive testament to the handling of this Spire GT-320s that I was able to pull off all those moves, mostly around the outside! That race felt like a win and is one I will look back on for a long time to remind me never to give up and to always keep believing.’

This event concluded a Covid-disrupted part-season for Sports 1000, with Richard’s results being: