Victory for Richard at Anglesey as Motorsport Returns to Wales 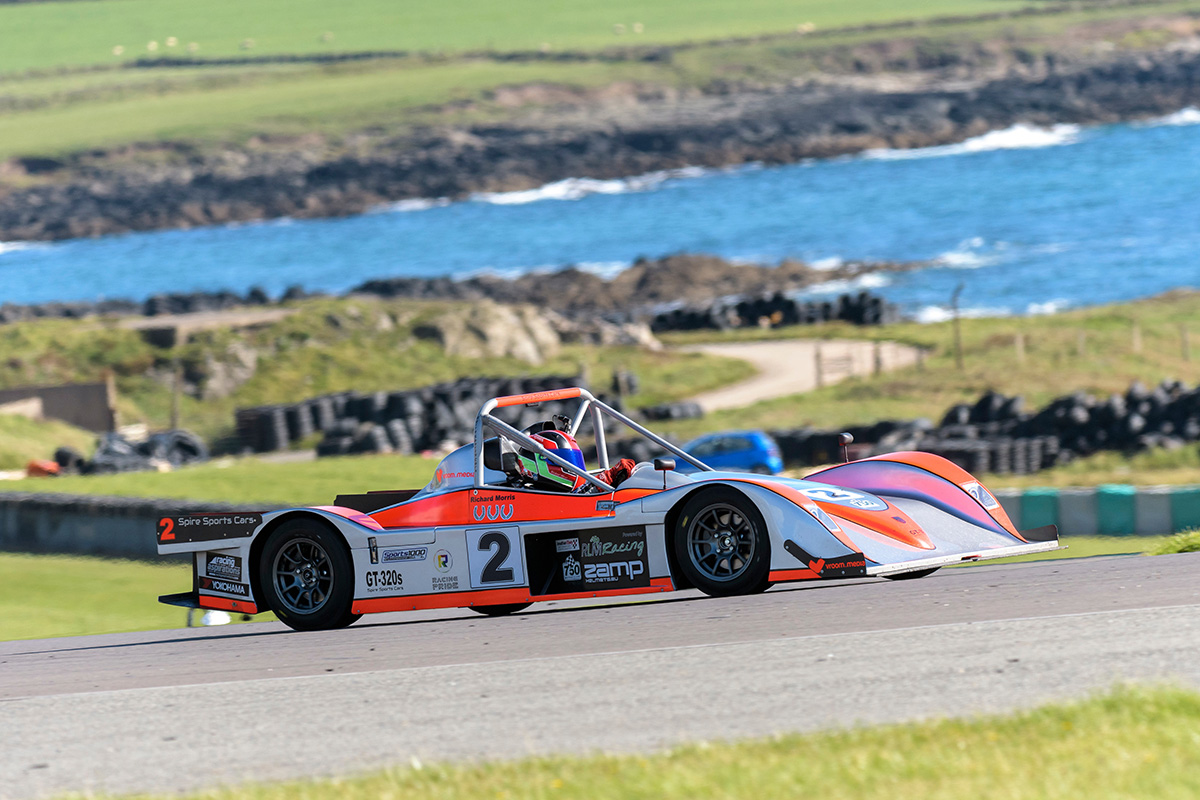 The third double-header race meeting of Richard’s season saw him travel to the beautiful seaside surroundings of Anglesey Circuit. The event was the first race meeting held in Wales since Coronavirus and was one of three test events being trialled by the Welsh government (alongside a triathlon and an outdoor theatrical performance). As such it was held behind closed doors with very restricted attendance. Still, it was a great pleasure and honour to be invited and to be part of restarting Welsh motorsport. Richard was run at this event by Tim Gray Motorsport (a team which is highly experienced at running Spire customer cars and has a close relationship with Spire), after Spire boss Paul Nightingale fell ill ahead of the meeting.

In qualifying Richard just missed out on a front-row start for Race 1, claiming 3rd on the grid. Track conditions had changed considerably over the weekend as the circuit was being used in anger for the first time after a lengthy lay-off and was washed with rain each night. The result was a trace of understeer just compromising the car’s balance in qualifying, but the team was able to make some small set-up changes ahead of racing to cure this.

The first half of Race 1 saw an intense scrap involving the two leading Spire cars of Richard and Ryan Yarrow and the three Mittell entries of Danny Andrew, Michael Roots, and Victor Neumann. On lap 1 Yarrow held the lead from pole, Danny Andrew jumped up from 4th to 2nd with a great start, and Richard slotted in behind Michael Roots in 4th, with Neumann settling in to 5th. Yarrow pulled out an early lead as the experienced Andrew focused on defending. Richard was able to take advantage of a slight mistake from Roots to squeeze up his inside under breaking, slotting in to 3rd behind Andrew. This started a fantastic wheel-to-wheel tussle with Andrew always being sure to cover the inside line and Richard attempting various moves around the outside but always being careful not to leave the door too widely open for Roots or Neumann behind.

At about two-thirds distance, Richard was finally able to pull alongside Andrew as the Mittell driver battled a snap of oversteer on the start/finish straight and around turn 1, enabling Richard to get ahead into the turn 2 hairpin. Almost immediately after, Andrew pulled off with a sudden engine failure, leaving Roots on Richard’s tail in 3rd. Without Andrew ahead, though, Richard was soon able to pull a gap. As Richard set out to put pressure on Yarrow, the race was turned on its head as Yarrow’s pushrod failed, and Richard swept through into 1st place. Richard put in a series of consistent lap-times, including setting the fastest lap of the race, to build a strong lead. Roots half-spun while trying to follow Richard, leaving Richard to take the win by a sizable margin over Neumann in 2nd and Roots in 3rd.

Race 2 was, if anything, still more dramatic even though there was less swapping of positions. Yarrow led off the line with Roots in 2nd in his Mittell and Richard slotting in to 3rd. The front 3 cars quickly pulled a substantial gap back to the rest of the pack despite the tricky track conditions created by a significant oil spill from the previous race which covered the line through the downhill ‘corkscrew’ section. As Richard repeatedly challenged Roots, Yarrow was able to open up a couple of car-lengths, but the top three remained in close formation. After roughly a third of the race, though, the safety car was deployed for a car which had spun on the oil and blocked the circuit. A couple of slow laps behind the safety car followed before the race was red flagged and the cars were reassembled on the grid for a second start and a shortened second half of the race. The same three cars led away from the grid, in the same order, and resumed battle. Richard went wheel to wheel with Roots numerous times in the 8 laps which followed but could never get to the inside line and take the place. Yarrow, Roots, and Richard held station to the flag, with Richard continuing his run of podium finishes.

Richard’s next event will be at Snetterton on the ‘300’ layout in October. Richard set the lap record for the ‘200’ layout on his last visit in July, and will be hoping to show that pace again when he returns to the Norfolk circuit for his last scheduled outing in the Spire this season.

Speaking after the event, Richard said: ‘Firstly, I’m so grateful that we had the opportunity to come here and race. Anglesey is a place I have a huge amount of affection for – my partner grew up near here, I’ve spent some wonderful times around here, and it’s a challenging circuit I really loved from the first time I raced here last season. It was fantastic to be part of bringing motorsport back to Wales and I feel very proud of that. Clearly I’m thrilled with picking up another win for Spire and another pair of podium finishes. We had to fight really hard at this event with so much wheel-to-wheel battling and obviously I have to thank Spire Sports Cars and Tim Gray Motorsport for the amazing car preparation which was key to the Race 1 win. All my thoughts now will be on how to put in the best possible performance at Snetterton next month.’