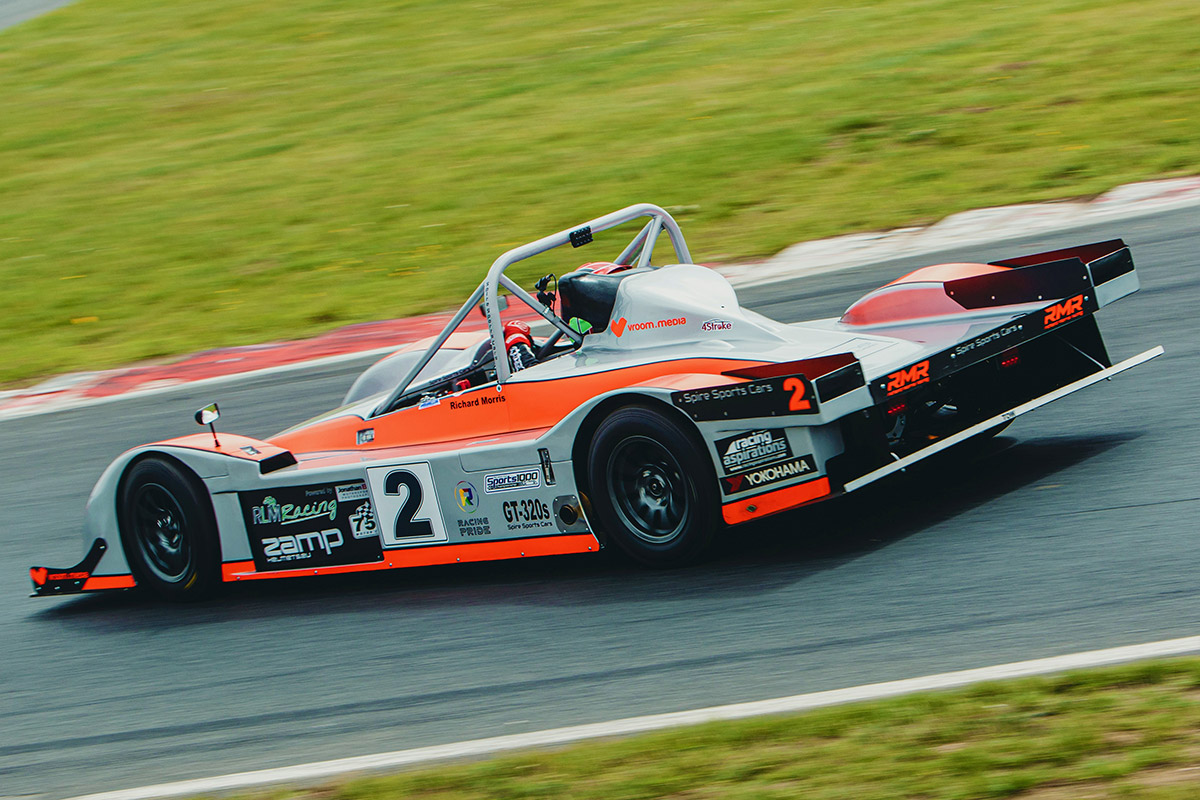 Richard Morris finally began his 2020 season with a double-header meeting at Snetterton Circuit in Norfolk on 18th July. It was a triumphant return to the track, nearly 10 months after the conclusion of the 2019 season. Racing on the ‘200’ layout the circuit was extremely busy as the Sports 1000 Championship had to share track-time with the ‘Bikesports’ series, predominantly made up of the significantly more powerful ‘slicks and wings’ Radical SR3 cars: while the two races were classified entirely separately this Covid-enforced one-off situation certainly added to the challenge.

Richard qualified on the front row for Round 1. Having held provisional pole from the first lap of the 15-minute qualifying session, Richard’s time was just narrowly beaten on the very last lap by a car which had found some clear space while he was held up in traffic. In Round 1, a dramatic opening lap of action saw Richard come round still in 2nd place, having swapped positions multiple times with the sister Spire of pole-sitter Ryan Yarrow and the Mittell of Danny Andrew.

When Andrew ran into trouble on the following lap, Richard swept through into the lead, and set about trying to create a gap back to Yarrow. While pushing hard, though, Richard dropped a wheel too wide out of the hairpin and went off onto the grass, putting him almost 10 seconds behind Yarrow who took the lead. Immediately, though, Richard began to unleash the true pace of his new works Spire car, setting the fastest lap of the race and a new lap record as he charged back into contention for the win. It was with three laps remaining that Richard caught back up to the tail of Yarrow’s Spire. Then, on the penultimate lap, he was able to get a far better run out of the hairpin onto the long back straight (the same place which had cost him earlier on in the race) to pull alongside.

Much as Yarrow squeezed Richard to the very edge of the track, their side-pods almost rubbing, Richard had the inside line and powered through into the lead. Richard held his nerve during a dramatic final-lap including having to dive past a Radical SR3 and sweep around the outside of a Sports 1000 back-marker to claim victory in the opening race of the season.

Richard had done enough in qualifying to claim pole position for Round 2, with the grid set by the second fastest times from the qualifying session. A fantastic start to the race saw him surge into the lead, but almost immediately the Sports 1000 front-runners were in amongst the back-markers from the Bikesports field. One of these cars boxed Richard in extremely awkwardly, allowing both Yarrow and Andrew to dive past.

A scintillating wheel-to-wheel battle with Andrew’s Mittell followed for around half of the race – providing a great deal of entertainment, but allowing Yarrow to build a lead. Richard did finally manage to get a decisive run, again along the back straight, moving up into 2nd place. No sooner had he done that, though, than Andrew actually pulled off a few corners later with a sudden mechanical failure. Richard charged after Yarrow, closing the gap down to under a second. Agonisingly, though, a Radical SR3 sat between the two Sports 1000 leaders – driving much more slowly through the corners, but deploying the additional power on the straight.

Eventually, Richard was able to force his way past this Radical, but was left with just a lap or so to try to pass Yarrow, who was able to hold on to the flag and force Richard to settle for 2nd place in Round 2. Still, together with his win and lap record in Round 1, Richard leaves Snetterton at the head of the Championship standings in this shortened 8-round season.

Reflecting on the weekend, Richard said:

“Firstly, it’s amazing just to be back racing again after so long off. Starting the season with a win and following that up with another strong podium finish is a fantastic haul of points to take away from the first day of the Championship and a well-earned reward for the team’s hard work preparing an amazing car for me to race. I’m delighted, too, to have claimed the lap record for myself and for Spire. It was really challenging on track with the amount of traffic adding another layer of difficulty and unpredictability and it certainly wasn’t the perfect performance – I can still improve for next time – but there are so many positives, as well as the points, to carry forward to Rounds 3 & 4 at Silverstone next month. Finally, I would of course like to thank the team, my partners, and all of my supporters for sticking with me through the months of not racing due to the pandemic – I hope performances like this weekend will put smiles on their faces, and that we can enjoy an incredible journey together this year.”