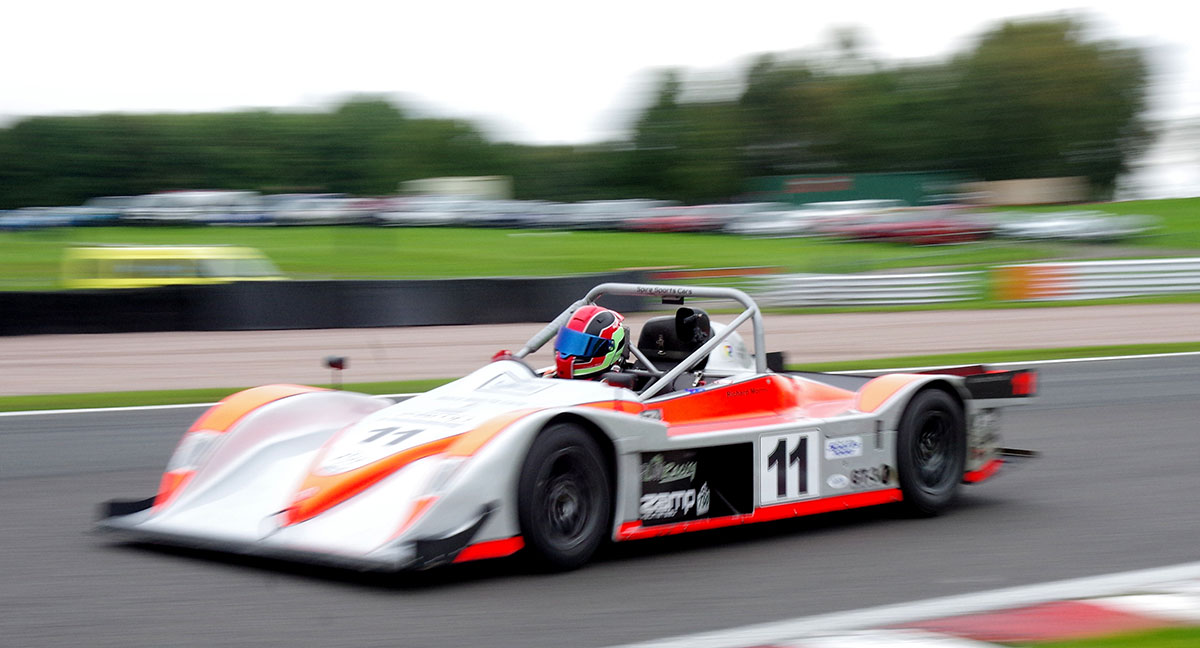 It was Oulton Park in Cheshire which hosted the final two rounds of the ZAMP Helmets RGB Sports 1000 Championship on 5thOctober 2019. Coming in to this event, Richard Morris, competing in his works Spire GT3s prototype car, held a commanding lead over the Mittell of Danny Andrew in the battle to finish the season as Vice Champion, with Mittell’s Christopher Wesemael already confirmed as Champion after the penultimate event at Donington Park.

A strong qualifying performance from Richard ensured he was well-placed to secure the one strong points finish he needed to put 2ndplace in the championship out of Andrew’s reach. Despite an engine blow-up afflicting Richard Miles’ car which left oil on the circuit and made it difficult to post competitive times in the final few laps of the session, Richard did enough earlier in the session to secure a front-row start for Round 13 (behind Wesemael) and third on the grid for Round 14 (with the Mittells of Wesemael and Andrew sharing the front row). This meant Richard had qualified on the front row of the grid for 7 out of the 14 rounds of his first season in sports prototype racing.

A good launch off the line propelled Richard past Wesemael at the start of Round 13, though as he moved across to cover the newly-crowned champion it was Andrew who was able to capitalise and take the lead into the first corner, with Richard slotting in to 2nd. Richard and Wesemael continued to fight down towards the hairpin, with Wesemael diving to the outside under braking but unable to slow the car down and running wide, allowing Richard to reclaim the position on the inside line. This was the first exchange of a scintillating battle in the opening phase of the race between the Spire and Mittell works cars.

Eventually, though, Wesemael was able to take advantage of the slipstream and get a run out of the fast first corner of the lap towards the down-hill ‘cascades’ left-hander, slipping through into 2ndplace. Wesemael and Richard then put in a sequence of fast laps to pull away further from the rest of the pack and begin to close the gap on Andrew. With Wesemael and Andrew locked in battle in the second half of the race Richard was able to close up and exert pressure on the Mittell duo, but while Wesemael was able to pass Andrew for the win, Richard, mindful of the need to secure points rather than take risks, had to settle for 3rdplace on this occasion. Still, this podium finish gave Richard more than enough points to give him an unassailable lead over Andrew in the championship standings and so confirm him as the 2019 ZAMP Helmets RGB Sports 1000 Championship Vice Champion.

Round 14 was once more a three-way fight between Richard in his Spire and the Mittells of Wesemael and Andrew. Wesemael again had a poor start due to a clutch issue, leaving Andrew to take the lead from the front row, and Richard again out-dragged Wesemael to take 2nd. Just as in Round 13, a scrap developed between Richard and Wesemael which allowed Andrew to build a modest but comfortable lead in the opening stages. This time, though, Richard was able to hold off Wesemael’s attacks and, as Wesemael began to struggle with his clutch, Richard was able to pull away from Wesemael and to chip away at Andrew’s lead. As the race drew on, Richard’s pace got stronger and stronger and he was able to set a sequence of fastest laps to cut the lead gap from 2.5 seconds to under 0.8 seconds at the flag but ran out of laps to challenge for the win. It was Andrew who won the final race of the season (confirming his 3rdplace in the championship), with Richard claiming 2ndplace together with fastest lap (his 8thpodium finish of the season), and Wesemael hanging on for 3rd.

Reacting to his results this weekend, Richard said:
“It’s a fantastic feeling to end this season, my first season in sports prototypes, as Vice Champion. It’s been a huge learning curve, both with the car and racing at circuits almost all of which were new to me, but we’ve been able to deliver consistently strong performances across the circuits we’ve visited and it’s a remarkable achievement that we’ve picked up eight podium finishes in just seven meetings. We’ve ended on a real high here, qualifying on the front row for Round 13, setting the fastest lap in Round 14, scoring another double podium, and being thoroughly in the fight against top opposition around this amazing Oulton Park track which all of the drivers love. I’m so grateful to Spire for the opportunity to race this beautiful car, and I can’t wait to build on everything I’ve learned from the experience as I look towards next season.”