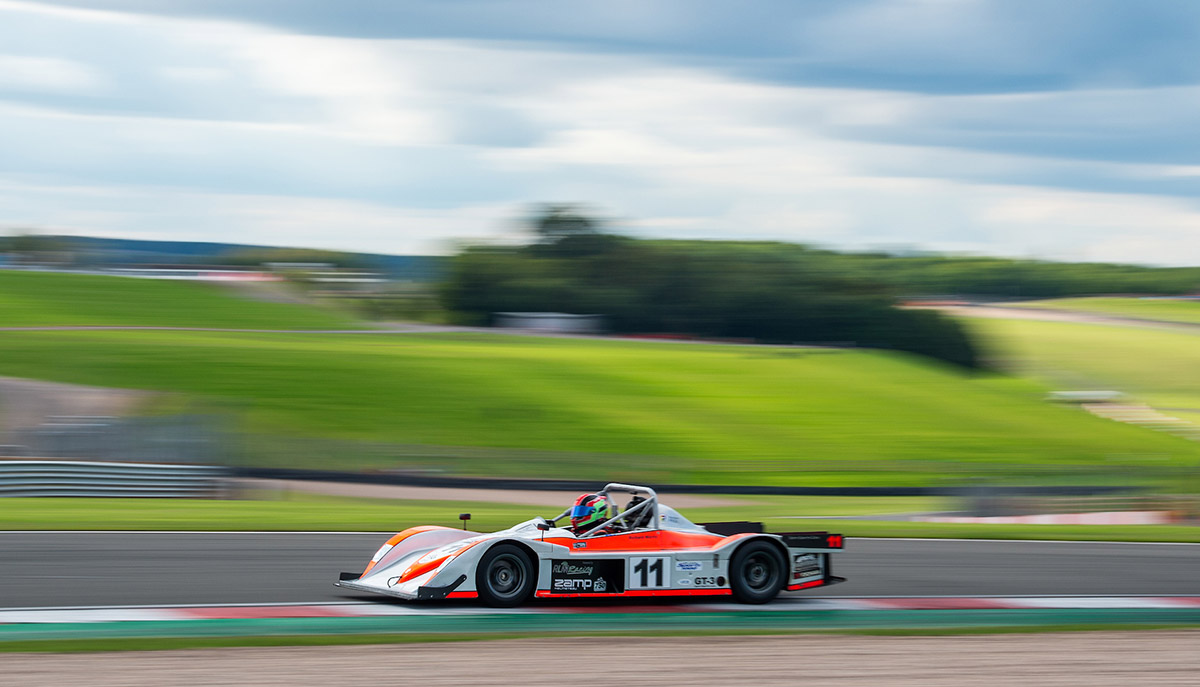 It was another strong performance from Spire Sports Cars works-team driver Richard Morris at Donington Park on Saturday 7th and Sunday 8th September 2019.
Friday practice ahead of the event was repeatedly punctuated by rain showers, meaning that there was little by way of representative running ahead of the start of racing on Saturday and so it was difficult to know how the balance of the car would feel or what the pace would be in dry conditions. Nevertheless, the day was very productive as an experience with Richard electing to run on dry tyres in damp, slippery conditions in order to work on this useful skill for the future.

On Saturday morning, a tactical error meant that Richard did not get clear laps in during the final stages of the qualifying session as the track was at its fastest, but he still qualified in 4th place for Round 11 and 3rd place for Round 12 and so started both races from the second row of the grid.

At the start of Round 11, a bit too much wheel spin off the line meant Richard had to fight for position into Turn 1. As the pack approached the braking zone, he had dropped to 7th but was able to pull off an aggressive ‘cut back’ on the exit of the first corner to retake two positions and rise back up to 5th place for the run down the hill. At this stage the race was being led, from pole, by the Mittell of Christopher Wesemael, followed by the Spires of Ryan Yarrow, Jonathan McGill, James Walker and then Richard in close formation. At the start of lap 3, Richard was able to take advantage of a mistake made by McGill through Turn 1 which caused him to have a slow exit and Walker, in turn, to hesitate fractionally.

As Walker looked to the inside of McGill, Richard was able to pull alongside around the outside of the track and then carried greater momentum through the Craner Curves to take 4th place. Just a few corners later, Richard was in position to challenge McGill, too, and pulled alongside on the back straight, securing the position by out-braking McGill into the chicane which ends the lap at Donington. This fighting had allowed the sister works-liveried Spire GT3s of Yarrow to build a gap, but a succession of fast laps from Richard soon saw him onto Yarrow’s tail.

As Yarrow took the defensive inside line on the entry into Turn 1 on lap 7 of the race, Richard was again able to draw alongside on the exit of the corner heading into the Craner Curves, this time having switched across to the inside of the track. The two Spires ran wheel to wheel through the Craner Curves at over 120mph, but it was Richard who held the line and took 2nd position. By this stage, Wesemael had an advantage of around 6-7 seconds in the lead. While Richard lowered his lap times by half a second now he had been released into clear air and was able to reduce the deficit to 5 seconds at one point, the gap between the pair remained largely static to the end of the race. Wesemael took the win with Richard in 2nd and Yarrow in 3rd.

Richard made a better start in Round 12 from the second row of the grid than the previous day, though still found himself in 5th place heading into Turn 1 before again being able to gain ground through the exit of the corner, taking 4th place before the Old Hairpin at the bottom of the hill behind front-row starters Wesemael and Walker and then Yarrow. Meanwhile, Danny Andrew, 3rd in the championship standings heading into the event at Donington Park and so one of Richard’s main points contenders, had made a blistering start in his Mittell after problems in qualifying and risen up into 5th by lap 3, closing in on Yarrow as Richard battled with him.

Richard made another important move to pass Yarrow once more. Andrew quickly cleared Yarrow as well, though, and was now right with Richard benefiting from the slipstream effect. With the championship in mind, Richard knew that it was crucial to keep Andrew behind rather than worrying about Walker and so put everything into defending from the Mittell. For a handful of laps this provided a fantastic battle, with Yarrow also able to stay in touch as the pair squabbled. Then, suddenly, Andrew’s Mittell broke down into the chicane and not only did this take Andrew out of the race, it also cost Yarrow a lot of time as he avoided the stricken car and damage from the debris he encountered later caused Yarrow to retire. This meant that Richard could now chase Walker and only a couple of laps passed before he was attacking the second-placed car. Walker had a lot of speed on the track’s two long straights and so Richard quickly realised he would have to attempt to make the move through some of the tighter corners climbing the hill.

In pushing to do this, Richard took too much kerb and had a half-spin. Although he retained 3rd place he lost time he was not able to regain before the end of the race and crossed the line 3rd on track behind Wesemael and Walker. Unfortunately, after the race a time penalty was imposed on Richard because he had run wide on too many occasions during the race and, although he had not gained any time or position advantage from this, the way the track limits rules are applied meant that he was given an automatic penalty, dropping him to 4th behind McGill. Still, the crucial main objective of beating nearest points-rivals Andrew and Yarrow had been achieved.

His 2nd place in Round 11 means that Richard has now taken 6 podium finishes from 6 race meetings in his first season racing a sports prototype car. Combined with 4th place in Round 12, Richard left Donington Park with a strong haul of points and he is holding 2nd place in the overall standings with just one event, at Oulton Park in early October, to come.

Speaking after the event, Richard said: ‘I had a huge amount of fun in both races battling wheel to wheel with my rivals and pulling off some big overtakes as well as defensive moves. It’s a great track and it’s a fantastic feeling to go side by side down through the Craner Curves at over 120mph and come out with the upper hand. There are one or two things we can learn from this weekend, and of course it’s galling to have my second podium of the event taken away on a bit of a technicality after such a scintillating race, but overall it’s another very solid meeting and there are so many positives to take from it – as well as a lot of Championship points and some silverware!’